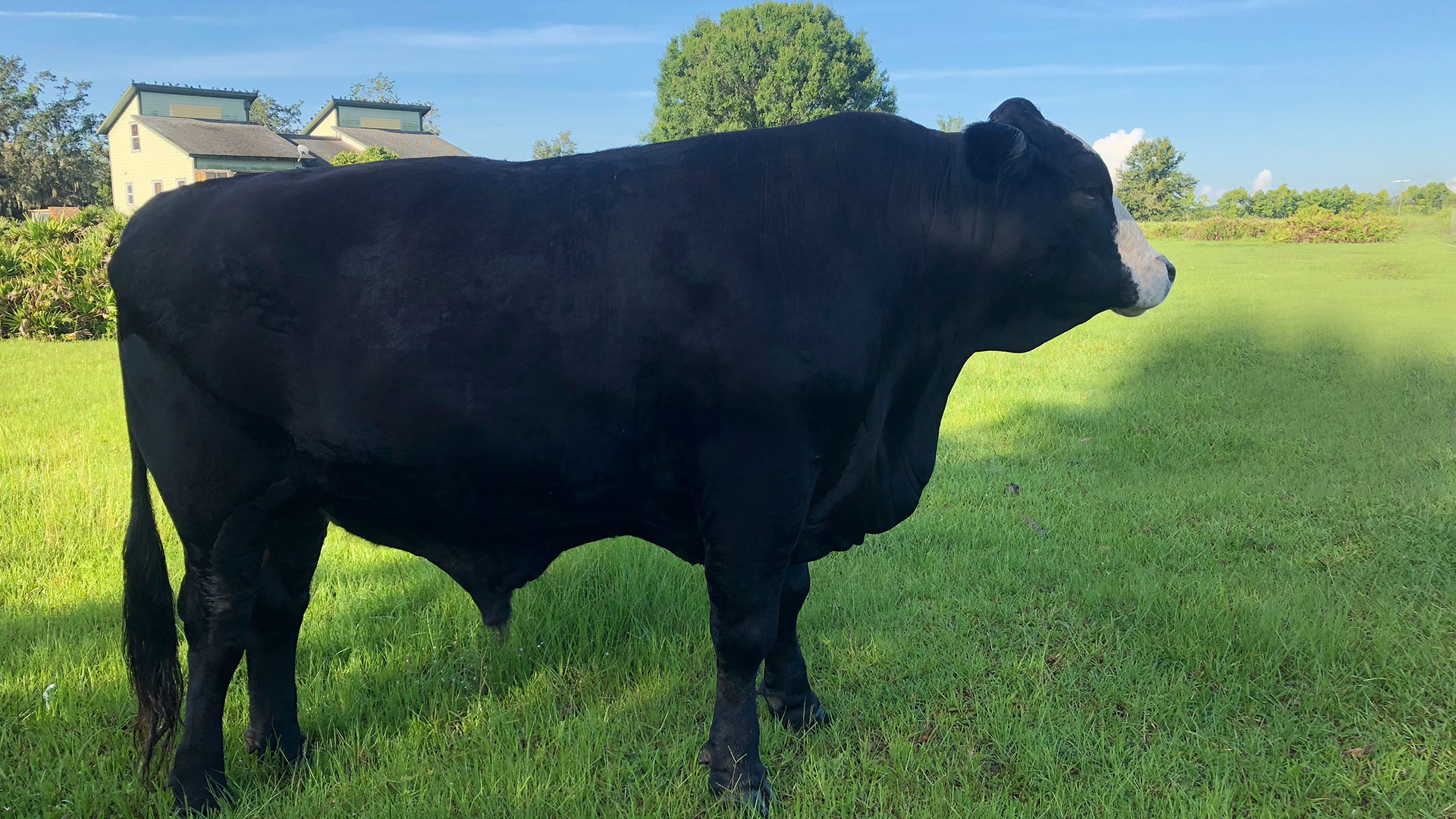 Sponsorships help provide feed, shelter, and veterinary care for the wonderful animals that live at Florida Rescue Farm and support our mission to provide safety, shelter, and dignity for farm animals in need.

We offer the opportunity to sponsor any of the animals on the farm. When you sponsor an animal at Florida Rescue Farm we will send you a Certificate of Sponsorship and a letter introducing your animal. We will then continue to send periodic updates about your new pal and you are always welcome to schedule a time to visit. If you have any questions or would like to know more about the animals available for sponsorship please email info@floridarescuefarm.org or call (941)209-9558 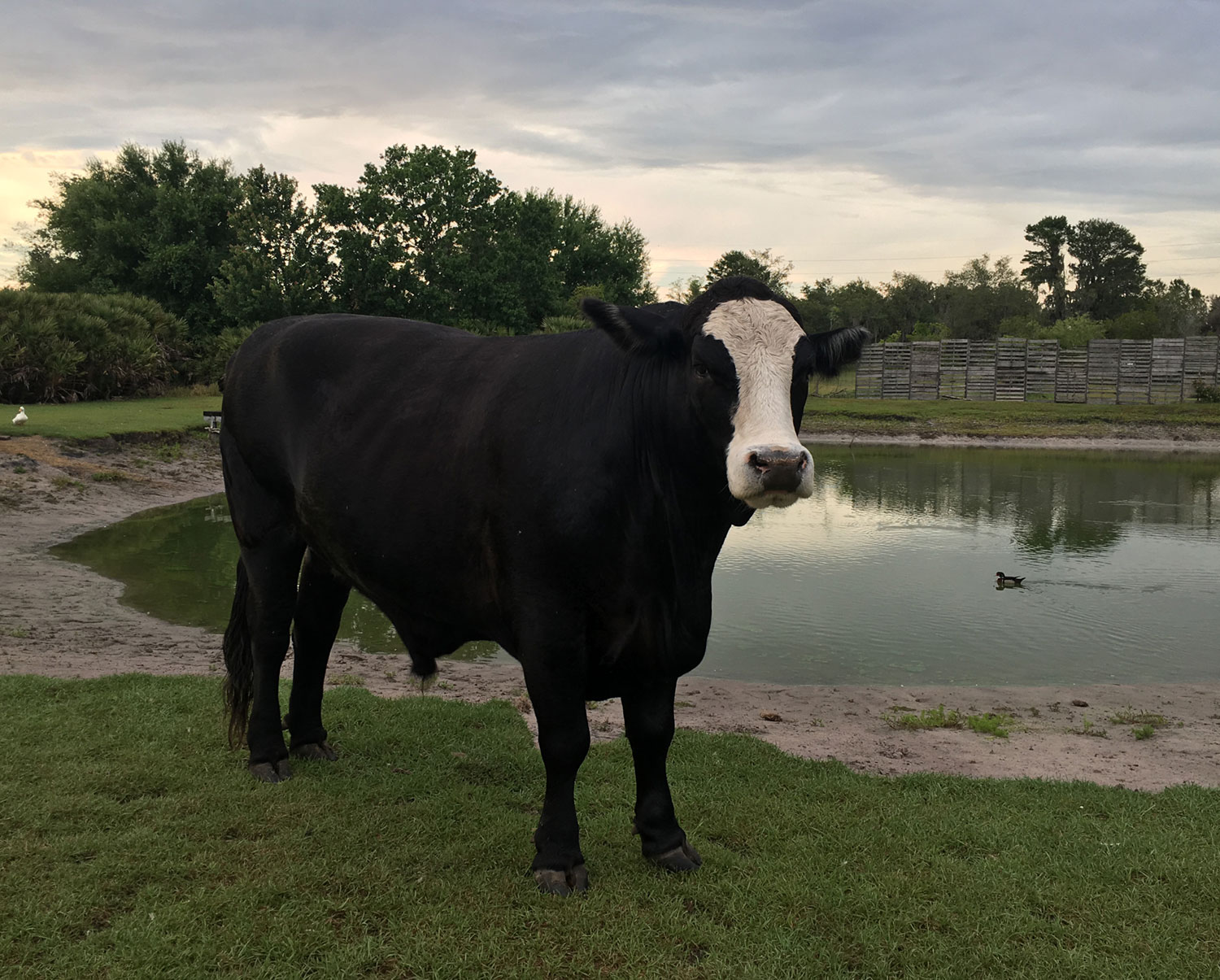 We like to call Moobee our cow ambassador. He is mischevious and majestic all at the same time. He came to us at 2-days-old when his mother was found dead from injuries she received during calving. He was destined to be a meat cow, however the rancher didn't have time to raise him so he gave him to the sanctuary. Meat cow no more! Moobee was our first cow and hence is a bit spoiled. He is the wise and benevolent leader of the cow herd. 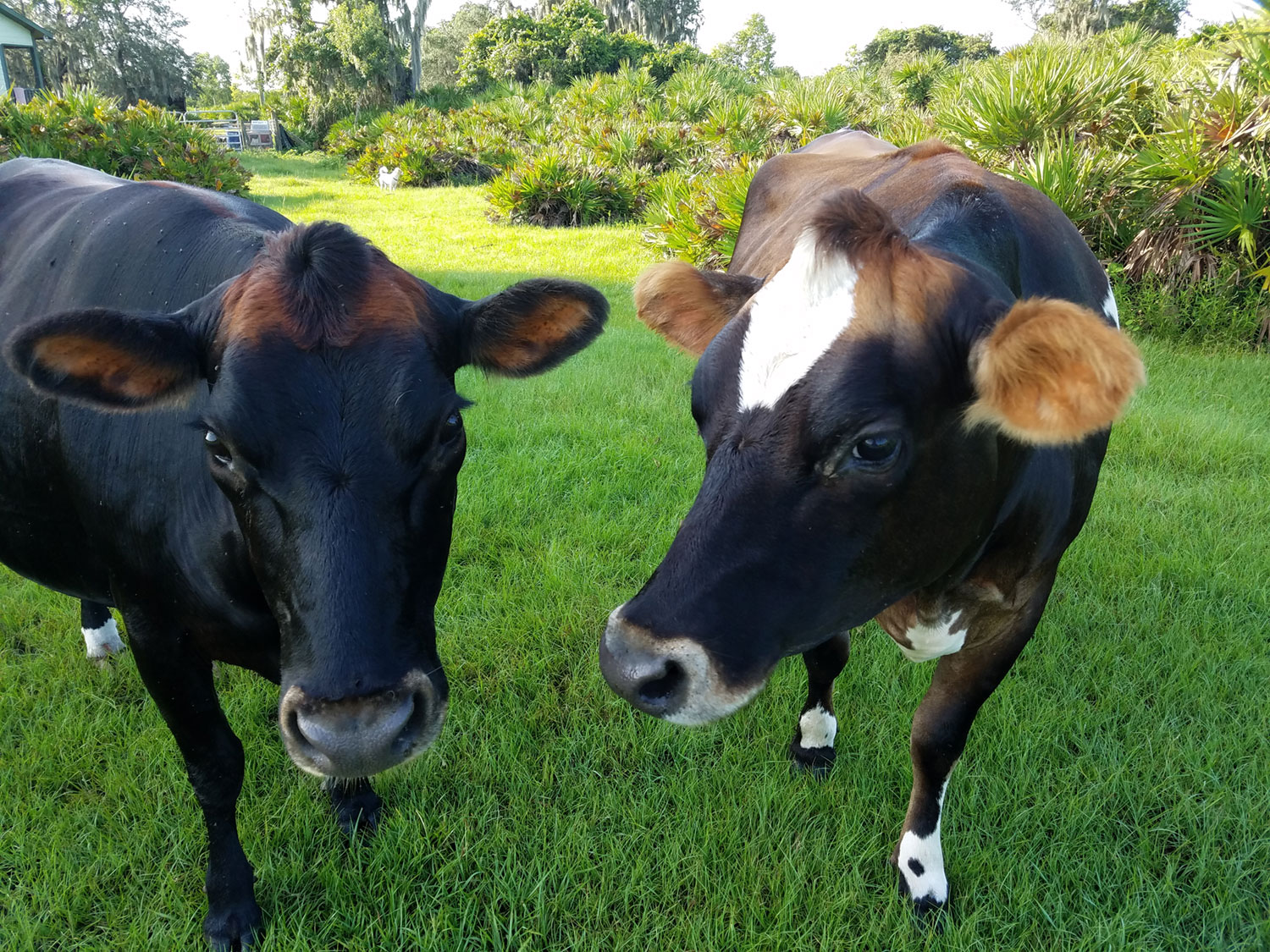 Maybee was destined for auction when we met her. She was 6-months old and clearly very scared. At the time we were still homesteading, and trying to get out of the commercial food loop and we thought we could do cruelty free dairy. Maybee was very patient with us and at 2-years-old she had her calf Miracle. We never separated her from her calf and after some time realized there was no reason to keep milking Maybee. We gave up dairy and Maybee and her daughter still live together on the farm. They are inseparable and are are gentle, sweet animals. 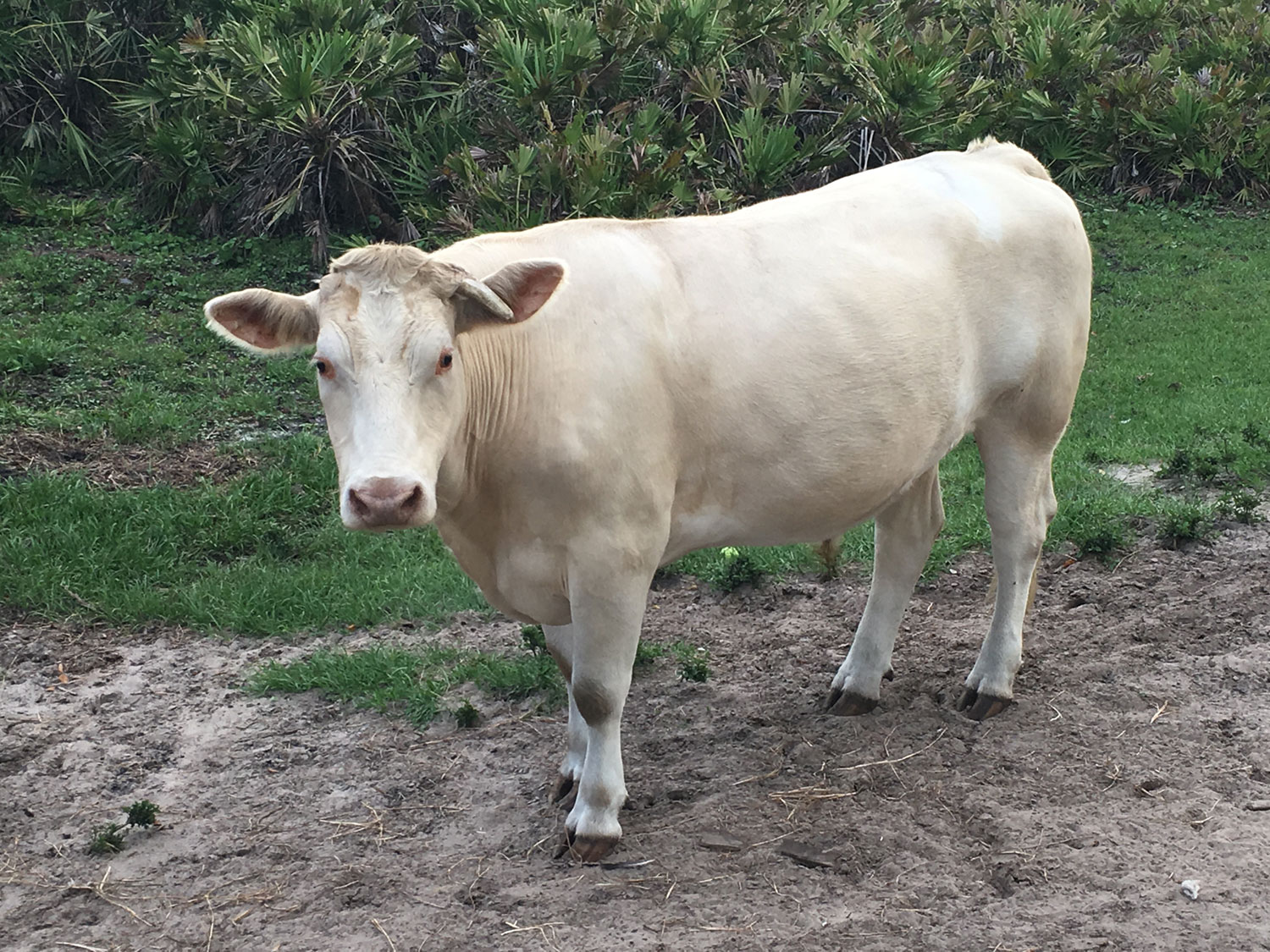 Norman's mom passed away while giving birth. He was bred to be a meat cow and was too large for a normal birth. It looked as though he would not survive, but the rancher gave us a chance. We nursed him, and we would pick him up and walk him around, and miraculously he made it! Norman is a delightful steer. He is a very gentle soul and has been good friends with Miracle since her arrival. 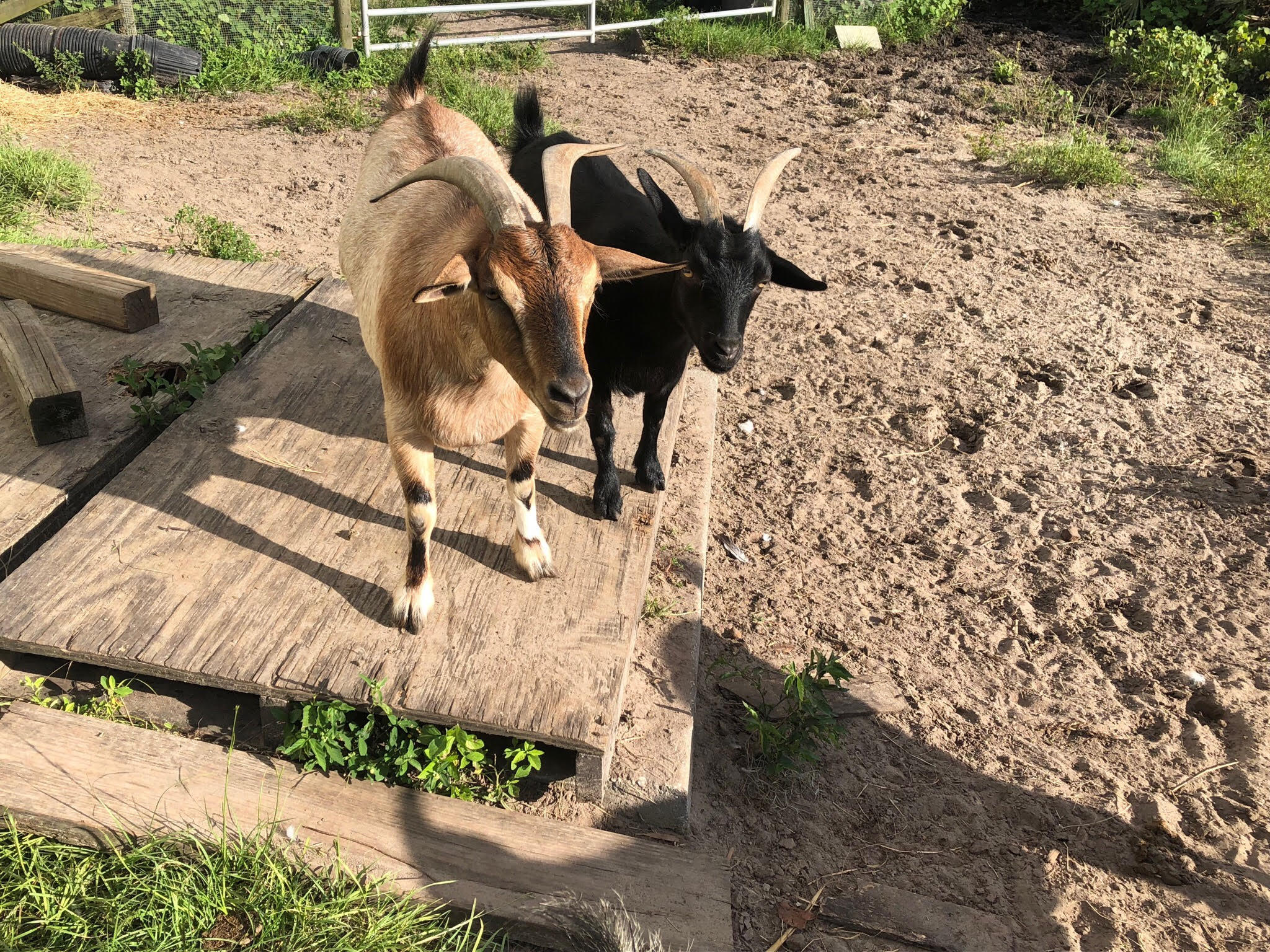 Jelly is a pygmy goat and has quite the personality. As the smallest goat in the herd, she is a bit of an outsider and has lots of attitude. She was abandoned and a concerned person brought her to the farm. Her roommate is Peanut, a Nigerian dwarf mix. She was going to auction because she was not a pure-breed. We rescued her and she became Jelly's BFF. 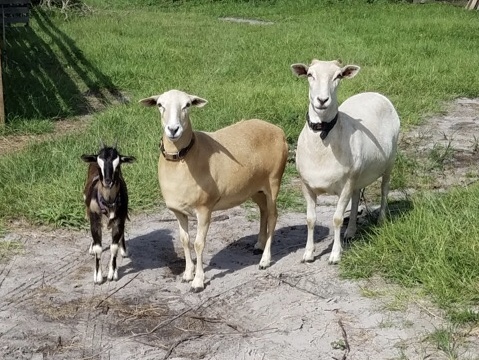 Molly, Red & Holly - Just arrived at the farm recently. Their owners are older, and due to some tragedies in the family could no longer care for their herd. They are a little shy but are warming up to us daily. Molly is a tiny little goat with a lot of spirit. She is quite vocal and is deeply bonded with her sheep buddies. Red and Holly are both hair-sheep (they are traditionally raised for meat, not wool). Red is Holly's mom and is a bit more stand-offish. Holly is the lighter of the two and is starting to trust us and come to us for affection. They are all very sweet, and I think as they get used to their new environment, that they will be very happy here.

Several years ago a tornado touched down near our farm. It destroyed our neighbors home and tragically, they perished as well, however their three goats were unharmed. The two females were pregnant and despite the stress of the tornado they delivered three healthy baby goats. Fred is the father (who was neutered as soon as he got here ;), Wilma and Butters are the moms. Their children are Kade May, Jo Jo & Domino. 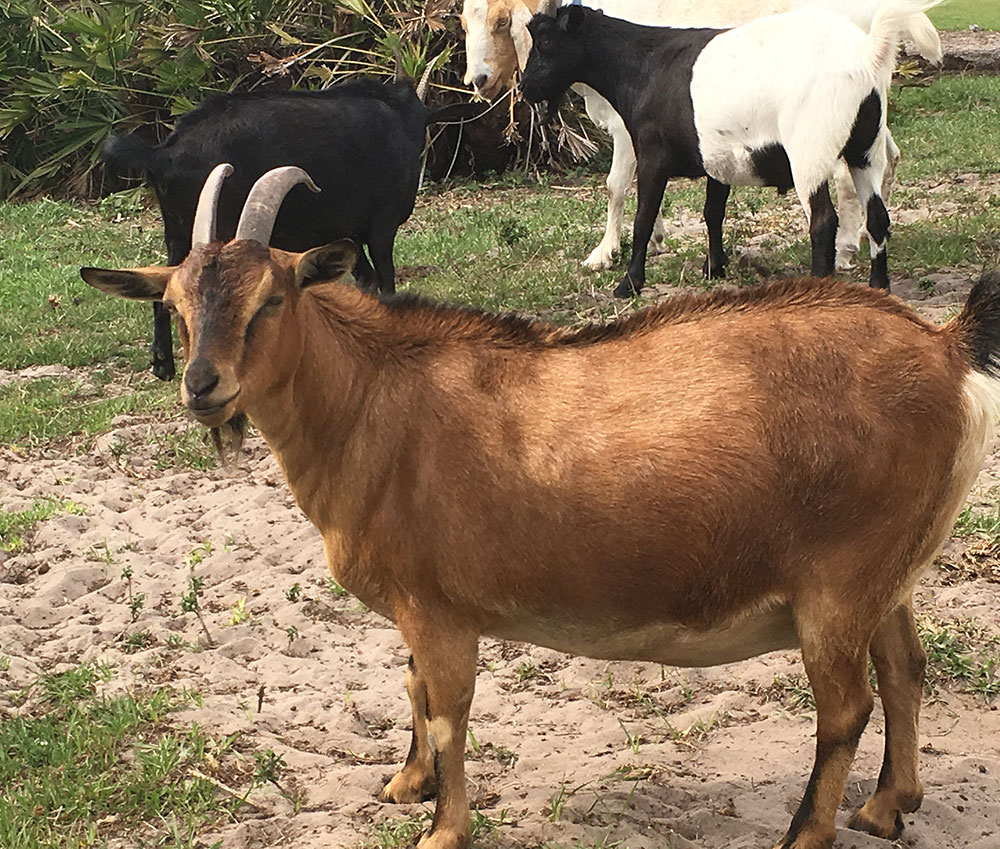 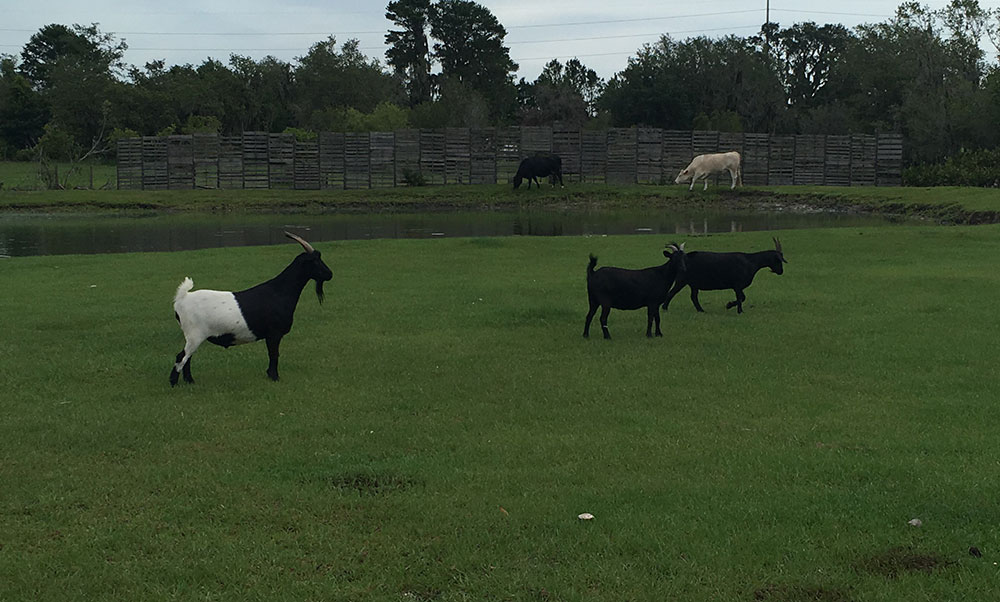 Fred with his daughters, Jo Jo and Domino 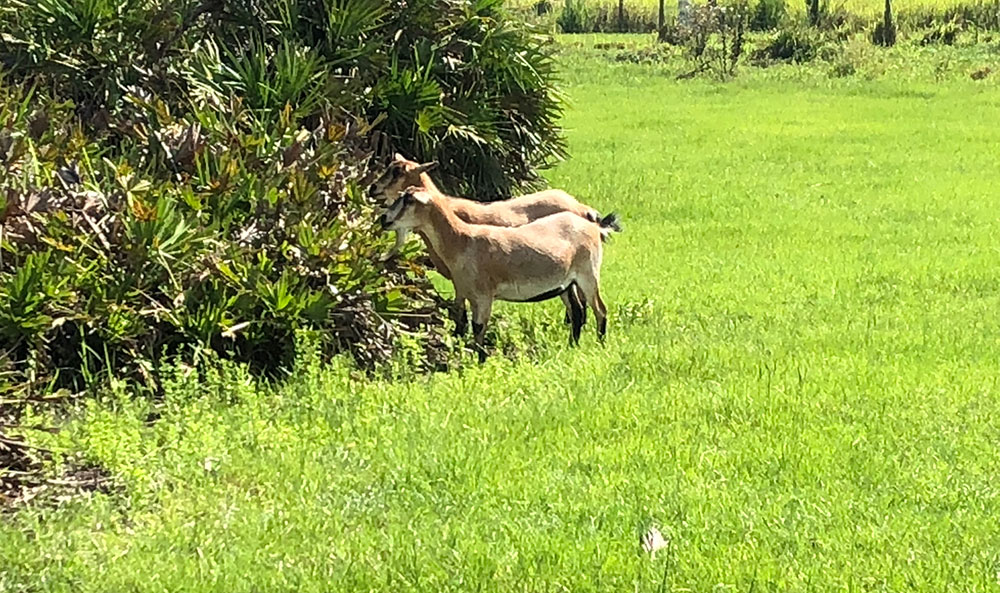 Kade May & her mom, Butters

Thunder and Lightning: These little guys are two of the sweetest goats I have ever met. If you lean down to Thunder he will give you a little goat kiss. His brother, Lightning, is not afraid of people, but he doesn't like to be petted, he's more of a loner. Their previous owner was actually sponsoring one of our goats (Jelly), she was an older person and she had a bad fall resulting in her hospitalization and ultimately her death. Her family was able to rehome all her animals, but not her goats. Then they saw her sponsorship certificate framed on the wall and they called us. We were so thankful that we had a chance to give back to her and we immediately adopted Thunder and Lightning and since then they have become such a presence on the farm. These are two really awesome souls.

Billy: Billy is a pip! He was an only goat for the first 2 years of his life! His humans loved him and took very good care of him, but they realized he needed a herd. Billy also is the only goat we have who will head-butt people he doesn't know. He doesn't do it with malice, he thinks he's playing, so often when we have visitors or tours I walk him on a leash.

Tupelo: Tupelo is a wool sheep. The local sheriff was called because she was roaming the streets, and when no one claimed her they didn't want to send her to auction so they called us. She has so much personality! She can be shy, but if you bring some apples or treats she is all over you. She's a great soul.

Kevin: Kevin is a new resident on the farm. He also was raised alone and when his humans were forced to move they could not find a place where they could take Kevin with them. He is just a nice guy and he and Billy and hit off immediately and are great friends. They both have beautiful eyes :) Kevin loves to be petted and is very fond of cabbage leaves.

Pee Wee: Pee Wee is a hair sheep. His humans saw him tied up to tree with no water and he was just a lamb. They bought him from the owner and took him home to their townhouse where he lived on the lanai for 6 months. As he got older he was breaking out of the lanai and they realized he needed a farm. When he came here, at 8 months old they were still bottle feeding him water and he had never been around other animals. He was so cute, he was trying to fit in with the goats and was so awkward. One day he was walking across the field in front of all the goats and he stumbled a little and I swear you could tell he was embarrassed (haven't we all been there!) He has been here now for over 4 years and has many friends and is a pillar of the herd. He is very friendly and often follows us around when we have tours. He does have chronic eczema so his eye area loses a little hair during the summer. We actually just built a solar-powered, air-conditioned enclosure for him and his friends to help relieve his eczema.

Alfred: Alfred is the oldest goat on the farm. He and his mom, Ginger came to the farm after their humans suffered a debilitating car accident and could no longer care for them. As you can imagine, his mom was very old and she passed away last year. The really cool thing is that Fred (mentioned above) really took care of Alfred. They are best buds now. Alfred is our largest goat and definitely one of the sweetest. He has a penchant for Cheerios.

FAQs about our sponsorship program

Choosing the animal you want to sponsor: We offer sponsorships for individual animals or the sponsorship can go to a herd or flock of the animal you choose. We list many of our beloved residents on this page, but fee free to contact us as at info@floridarescuefarm.org as everyone is not necessarily listed.

Can animals have multiple sponsors? Yes. Sponsorship donations are technically symbolic as the funds go towards to feeding, vet care, and medications for all of the animals, and are not marked for that specific animal (It’s hard to tell the chickens not to share their grain :)

Losing a sponsored friend: We do have many older residents, and some that have irreversible health issues, so occasionally someone’s sponsored friend passes away. We will notify you as soon as possible and give you the opportunity to transfer your sponsorship to another animal.